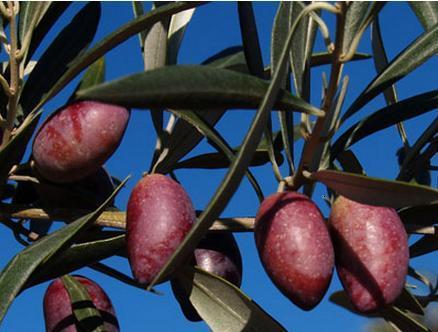 Cornicabra is a variety of olive native to Mora de Toledo (Castilla La Mancha, Spain), and its cultivation area is spread mainly through the Tagus river valley (Madrid, Toledo, Cáceres) and also extensive areas between Badajoz and Ciudad Real.

It is the second Spanish olive variety in terms of cultivated area, with some 270,000 ha – the first being the Picual variety. The name refers to the curved shape of the fruit, which is reminiscent of a goat horn. Its Extra Virgin Olive Oil (EVOO) is highly aromatic, with notes of fruity olive and other fruits including apple. Herbal olive leaf notes can be appreciated on the palate, with a slightly bitter taste.

This variety of olive, as well as the oil from it, is protected by the Montes de Toledo PDO (European Protected Designation of Origin) since 2000.

The main region where it is cultivated is an area of ​​great ecological value and includes the Cabañeros National Park, considered one of the best examples of the Mediterranean forest as well as being home to endangered species such as the lynx and the imperial eagle.

The Montes de Toledo region has an average altitude of 1,400 m however the olive cultivars are situated between 550 and 750 m. The region has a Mediterranean-continental climate characterized by its harshness: cold winters, very hot summers and low rainfall which permits a better control of pests and diseases. Climate and geographic factors – in particular, altitude and low rainfall – significantly influence the content of polyphenols in olives as well as producing olive oil with more intense aromas and flavours. In fact Cornicabra EVOO has one of the highest contents of any olive oil  in the world. Polyphenols are the most abundant natural antioxidants in nature and have many proven health and medical benefits.

It is a region with a long olive-growing tradition, dating back to the time of the Arab presence in Spain (711 – 1492 AD) to the present day. Farmers have been relatively isolated from the rest of the Spanish olive-growing regions and have also been selecting the best olive trees since ancient times, giving rise over the centuries to the appearance of the “Cornicabra”, a variety of olive exclusive to this region with characteristics that make both its olives and the oil obtained from them very distinctive and unique.

The olive oil from the Cornicabra olive variety has traditionally enjoyed great international prestige among olive oil professionals, often known as the “Toledo type“. This prestige is due both to its physical & chemical characteristics – it has a very high oleic acid and polyphenol contents as well as a low linoleic acid content. The ratio of oleic to linoleic acid is also a very important characteristic. These properties, as well as making them very interesting from the health and medical perspective, also make this olive oil one of the most stable in the world (resistance to rancidity).

Below are some of the physical and chemical properties of Cornicabra EVOO.

Here is a comparison of a number of different olive oil varieties and some of their most important properties.

Let´s look at the colour, aroma and flavour of this EVOO.

The colour of Cornicabra EVOO varies depending on the harvest season and the geographical location within the region, from golden yellow to deep green.

From a taste and aroma sensory perspective one can find notes ranging from apple and green almond, fresh grass, olive leaf, arugula and tomato in oil cold pressed from early harvested olives to ripe apple and almond as well as exotic fruits such as avocado when the oil is cold pressed from late harvested olives. Cornicabra EVOO has remarkable sweet and bitter balance with a medium intensity spicy taste.