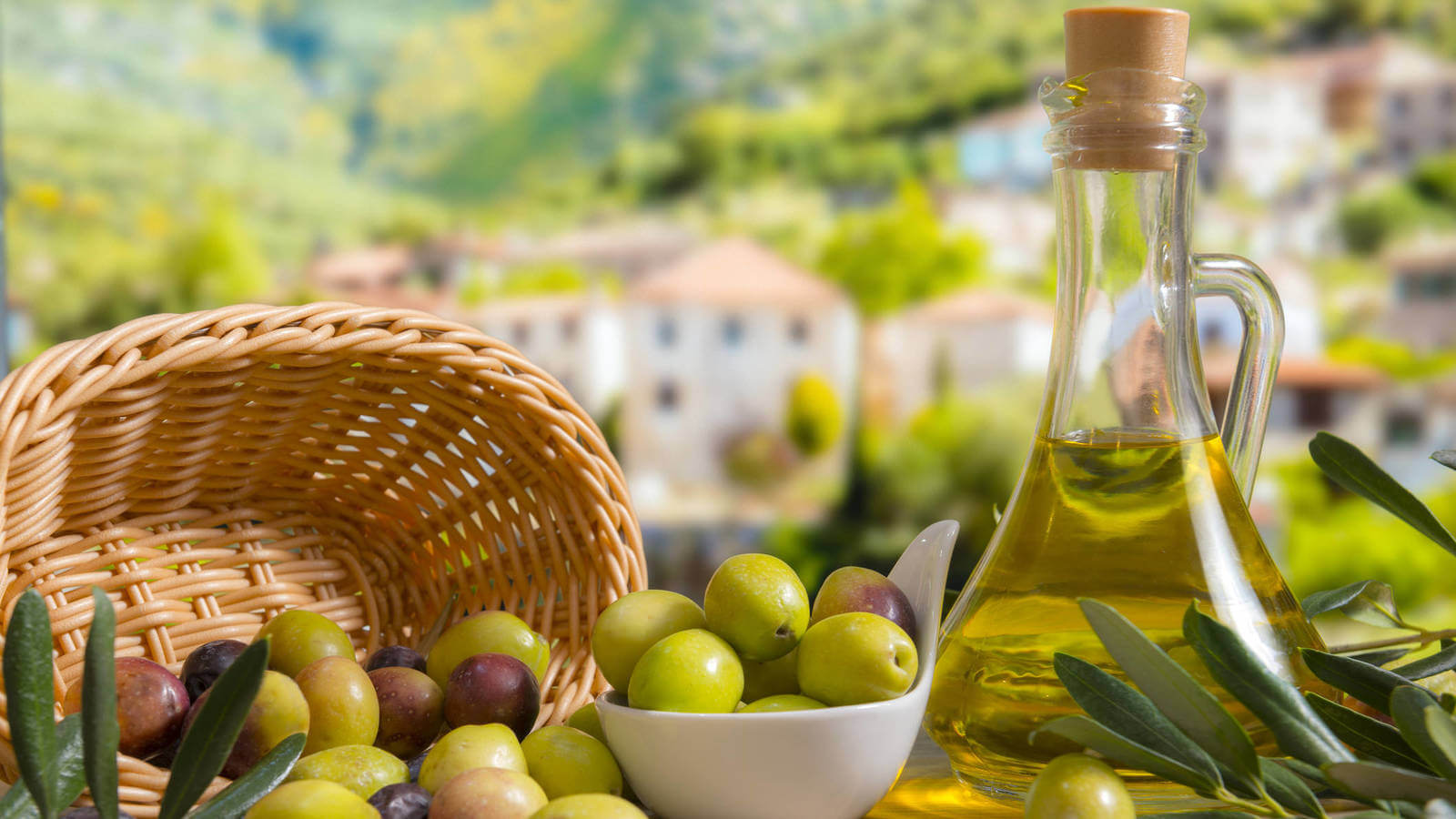 Olive trees can survive drought, adapt to almost any sunny or temperate environment, thrive in most types of soil, and even endure periods of low temperatures. One of the oldest known olive trees is over 3,000 years old and it still bears fruit in Crete. Today there are about 800 million olive trees growing on Earth and around 500 varieties.

Although in the Mediterranean region, olive oil has been consumed for thousands of years, over the past few decades olive oil has gone from relative obscurity to having a well-deserved presence in many thousands of households worldwide.

To be specific, the type of olive oil we are talking about is usually Extra Virgin Olive Oil (EVOO). It has by far the highest quality and is without a doubt the healthiest of all. It has the lowest acidity level (0.8% or less), maximum active ingredients and optimum properties which provide EVOO´s exceptional health and medical benefits.

If one were to ask the average consumer in countries such as the US, UK or Australia “Which olive oil do you think is the best in the world?” the most likely answer would generally be Italian, Spanish or Greek – few would think of other countries such as Croatia, Turkey or Tunisia. Furthermore, there are a number of New World countries that have begun producing good quality olive oil like Australia, Argentina, Chile and the USA.

Italian olive oil is known in many markets. Italy knows how to sell its products very well and it has done so – with great success – with fashion, cars, pasta and olive oil. Pizzerias and Italian food restaurants have showcased “Made in Italy” food products all over the world. The idea that Italian olive oil is the best in the world has been very well marketed and promoted for decades and, clearly, the message has permeated.

There are, of course, many other cases of exceptional marketing and promotion of products around the world with other food products. Some of these include French wine, Australian wine, New Zealand´s Manuka honey and so on. These marketing campaigns are excellent examples of how to promote a product, like the classic campaigns of Coca Cola and Kellogg´s Corn Flakes for example.

Does that make them the best? Well, as the saying goes, “the devil is in the detail”. Let´s do some basic research using reputable, reliable, verifiable and impartial information sources to help shed light on the subject.

The European Union is the largest producer in the world by far accounting for roughly 70% of the total world production. It is also the largest exporter and consumer of olive oil in the world.

We can also look at the top producing countries as a percentage of the total worldwide production to have a better idea of the largest producers. Spain has steadily been increasing its production. It clearly stands out with almost 50% of the worldwide production over the past 10 years or so.

Interestingly, if we look at the top three producing countries they account for approx. 2/3 of the total world production on average each year. They are: Spain, Italy and Greece.

From the above graph, we can see that the largest importer of olive oil in the world by far is the USA with approx. 300-350,000 T/year in recent years.

Let´s also look at the EU intra-trade of olive oil (Fig. 4). What the chart is telling us is that the largest producer, which is Spain exports roughly 25% of its total production in bulk to other EU countries. The figure actually varies year to year however it is typically in the 20-30% range. It exported 153,800 T to Italy, for example, in the 2019/2020 season. Greece and Portugal also exported significant amounts of olive oil to Italy during this period as well. Italy actually only produced 340,000 T of olive oil in 2019/2020. Some of the imported oil is for local consumption however, a large proportion of the imported bulk olive oil is blended with Italian olive oil, re-bottled and exported under the “Made in Italy” label. This begs the question: which country should be considered as the “producer” of this olive oil: the source country or the bottler?

There are three countries that stand out as major exporters: Spain, Italy and Tunisia. Tunisia has seen variations year over year. Spain has steadily been increasing its exports for several decades now while Italy has maintained its exports of olive oil relatively consistently.

Let´s review the ranking of the world´s best EVOOs. To do so, it is always advisable to review the results over an extended period of time so as to provide a seasonally adjusted and balanced view. We chose a period of ten (10) years:  from 2010/2011 to 2019/2020.

We looked at the results from several perspectives over the 10 year period:

The results have been tabulated in Fig. 8. An important point is that there are many olive oil producers (estates and mills) that do not submit their olive oil to international competitions.

CHANGES IN THE OLIVE OIL MARKET

What was the change and why is it significant? Spain began to focus seriously on the world olive oil market only a few decades ago. The autarky imposed by the Franco regime meant that olive oil could only be exported by state run enterprises for many decades. “The sector disappeared from the map and when we tried to reposition ourselves we had a lot of disadvantages“, says Teresa Pérez, manager from Olive Oil from Spain (a non-profit organization representing the industry).

Since the Franco period, Spain steadily increased total production as well as its exports. Another key transition has been the slow but constant transition away from bulk exports to other countries to high quality, branded and bottled EVOO exports.

The results in the past few decades have been impressive.

The director of the Olive Oil Exporting Industry and Trade Association (Asoliva), Rafael Picó, insists that in the world of olive oil Italy has lost first place, both as a producer and as a brand. “They have no reference company left, most of them have been acquired by Spanish companies, such as Deoleo, which owns such emblematic brands as Bertolli, Carapelli and Sasso,” Picó highlights.

The production of extremely high quality olive oil, especially EVOO, requires a great deal of experience as well as attention to detail and strict adherence to the production process to ensure optimum properties in the final product.

Human factors will also affect the final quality. Top EVOO producers (olive oil estates or mills) with extensive experience are masters at optimizing every step of the manufacturing process and at taking timely, appropriate decisions. From harvesting, screening and cleaning through grinding and decanting the olive oil. Storage is also important as is the final packaging. The decisions taken by the producer at key moments as well as the focus on all the steps of the olive oil production process will determine the quality of the resulting product.

As the largest producing region in the world by far, the European Commission has made a considerable effort on improving its quality standards and regulating the industry to ensure that olive oil maintains its highest quality and minimizes or eliminates non-compliance and fraud. Both have occurred in the past and, to a lesser degree, continue to occur. A very common complaint is failure to comply with olive oil labelling regulations and also incorrectly classifying oil in a higher grade (e.g. virgin olive oil sold as EVOO).

The differences in physical properties and characteristics are related to specific olive oil varieties. Some varieties have higher content of antioxidants, polyphenols and other bioactive compounds – however this is related to the specific varieties and not a specific country. Overall, EVOOs will have excellent health and medical benefits, which are extremely beneficial both for our health and also our longevity if combined with an excellent diet such as the Mediterranean diet.

Let´s look at the colour, aroma and flavour of Extra Virgin Olive Oil.

The different olive cultivars, geographies, climate and also when the olive has been harvested will influence enormously the colour of the olive oil. Other factors that are important are whether it is a monovarietal or a coupage or blend of various olive oil varieties. Colour can vary from golden yellow to dark green. This does not influence the quality.

Monovarietal olive oil tends to have a strong aroma and taste – if it doesn´t then one should question its quality.

Flavours vary widely as well, significantly influenced by the many variables mentioned. A typical description one can find in many articles is that Spanish olive oil has a “nutty and rich fruity” taste while Italian olive oils have a “herbal tang and a grassy” flavour. Other countries are given other stereotyped flavours.

The major producing countries will have a huge variation in colour, aroma and flavour within their borders depending on the level of mastery of the olive oil producer, the olive cultivar as well as the natural and human factors mentioned earlier.

So, who is the brave subject matter expert who would venture to objectively say that a particular country has the “best” olive oil? It´s like trying to find the “best” wine producing country. It is not a simple question to answer nor is there one answer – that is if we are truly objective and not driven by commercial, marketing, patriotic or other reasons (of which there are many examples in the media).

However, regarding olive oil we can objectively draw a number of conclusions:

Polyphenols and your health

1 thought on “Which country has the best olive oil?”